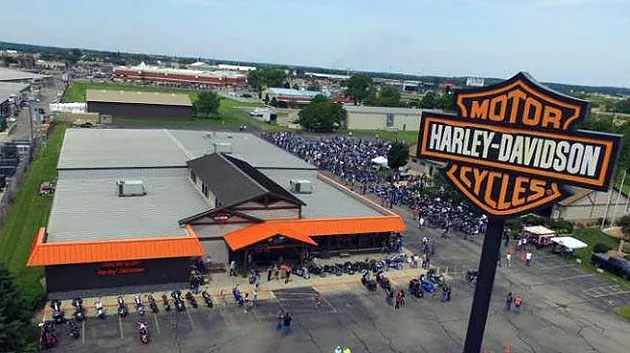 Boardtracker H-D is part of a two-store group located in Janesville, WI. Their mission statement reads: “Building lasting relationships with our partners and employees while serving the recreational and travel community. Our core values shall be based on Honesty and Integrity and Service to the Community.”

Brandon Wilson, General Manager, spent the last 12 months working on systems and processes. One big piece of that was getting his guys to embrace the phone and use it like the powerful sales tool that it is. The previous year saw a sizeable chunk of advertising dollars spent on branding the dealership’s name change. In 2017, Brandon knew he needed to drive more traffic through the doors and generate leads. He was confident that if we could execute in these two areas, his team could take care of the rest.

I was confident we could take care of driving traffic and generating leads. That is the trademark of the Sharp Shooter Program. We start by identifying a dealership’s ‘Buying Base’, a combination of past customers and conquest prospects (folks who ride H-D and live in their DAT but haven’t bought from them). Every dealer has a huge opportunity to increase the frequency of visits from their current, active customers (thereby increasing the amount of money they spend with the dealership per year) and reactivate folks who haven’t spent money with them in over a year. The average dealership has roughly 70% of their database not actively spending money with them. Outside of the customer database, no dealership has 100% market share in their DAT which provides additional opportunities to sell more bikes.

Once we identify these folks, we give them up to 12 direct opportunities to respond to the marketing. Each piece of communication incentivizes customers to go online and tell them who they are, how to contact them and what they interested in buying from them. The message is all about the customer and what’s in it for them, resulting in the type of traffic most dealers crave. Focusing on what customers want (being invited to a party) and not what the dealer wants (sell bikes, P&A, service) results in more traffic, leads and ultimately sales in each department.

Brandon has just completed his first two of 12 campaigns this year and so far, we are fulfilling our end of the bargain and his team is fulfilling theirs!

For their Too Cold to Ride, Hottest Time to Buy Event on January 28th, they had 516 surveys completed, which created a total of 410 sales opportunities in P&A, Service, and riding gear, PLUS 95 responses for a new or used bike.

Here’s what Brandon had to say after their first event: “Wow! What a campaign! Thank you for getting this promotion off and running in short order. We sold 3 motorcycles on Saturday and have 3 more scheduled to go out by end of day tomorrow.”

The event included some seminars which previously never had more than 15 people attend. The staff setup 40 chairs and then started pulling them away so the space didn’t look empty. They ended up putting them all back and ran out of chairs so the seminars were standing-room only. Brandon said, “We had 70+ people attend each of our seminars which is unheard of. Our traffic grew by 156% with close to 400 people attending the event.”

For their Motorcyclist Appreciation Day on February 25th, they had 680 surveys completed, which created a total of 543 sales opportunities in P&A, Service, and riding gear, PLUS 86 responses for a new or used unit.

I got to catch up with Brandon after the event and he said it was a record February! “We sold more motorcycles in January than in any other January since 2010; February, more since 2011. Every department crushed their goal this month. We sold 4 motorcycles on Saturday. It feels like May! I’m sold…any dealer that doesn’t benefit from this program doesn’t have the right systems and processes in place. You guys bring the people in and generate leads and we do the rest.”

April means the riding season has arrived! Check out the inserts for some killer campaign options for April and for more information on how the Sharp Shooter Program can help you achieve your marketing goals in 2017, call me on my direct line 877-242-4472 ext: 112. Happy selling.