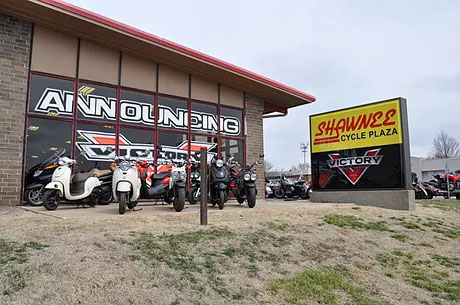 Shawnee Cycle Plaza is Kansas City’s premier motorcycle, ATV and scooter dealership selling Honda, Kawasaki, Yamaha and CFMoto. With 137 Google reviews and a 4.4 star rating, they live up to their tag line that, “You can’t buy from a nicer bunch of guys!”

Shawnee Cycle Plaza invited 3,000 of their past customers and 3,000 conquest prospects who ride what they sell, live in their backyard but haven’t bought from them. Using a nice mix of active, inactive and prospective customers, they knew they could reactivate customers who hadn’t spent money with them in the previous year, drive some new blood through the door and increase frequency of visits of their existing customers to increase the number of customers spending money with them and the amount they spend in 2017.

To ensure everyone received the message, we targeted them with up to 12 direct marketing strategies. By giving customers more opportunities to respond to the marketing, we increase the amount of traffic on event day and the number of leads being generated. Bigger picture, we’ve learned that the more you touch your customer base, the more responsive they become and over the course of the year, more of them walk through the dealership’s doors more often and the business grows.

The message we utilize is focused on inviting customers to a party. By focusing on what the customer wants (things like food, drinks, door prizes and demo rides), the dealership gets more of what they want (more P&A, service and gear sales and a few more units out the door). Long-term, customers never get tired of being invited to a party so they end up walking through the doors more often and when they’re there, they can’t help themselves but to spend more money.

With so much marketing going out the doors, it’s important to have it hit customers at just the right time to really maximize the response from each media. Our marketing begins hitting customers roughly 10 days before the event and gives them a different opportunity to respond to the survey site (to generate leads for every department) almost every day leading up to event day. 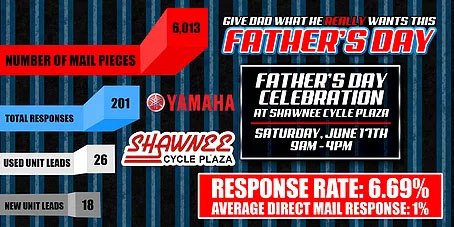 We have an ‘Improvise, Adapt, & Overcome’ award here at Powersports Marketing and I think we’re going to have to give it to Paul McMinn and his staff at Shawnee Cycle Plaza this week! These guys didn’t get a great start to their Father’s Day Event June 17th. Pulling up to the dealership Saturday morning, he realized something was wrong after a heavy storm rolled through the night before. After unlocking the door, the alarm was making a funny noise and he soon discovered he was out of power (one of 98,000+ homes/businesses affected). Instead of canceling the event, these guys put their game faces on and in Paul’s words, “Took those lemons and made lemonade.”

Unfortunately, power wouldn’t return until half the day was over so they ended up pulling out the old manual credit card machine and hand-writing bill of sales for parts & accessories. They even hand wrote two unit sales with a total of five going out the door on Saturday and another two going out Monday after the event when this article went to print. Parts ended up doing $6-8,000 on just in-stock inventory, while navigating customers through the parts department with flashlights. They even fired up generators to get some work done back in service!

Paul said it was an amazing event and numbers were great in every department even without power. “It was crazy!”

Executing on all four pillars of the Sharp Shooter Program - Right Audience, Right Media, Right Message & Right Timing, really paid off. The program generated 201 completed surveys including 157 sales opportunities in Clothing, P&A and Service, PLUS 44 responses for a new or used unit!

July means the 4th of July, Summer Sizzler’s and Dog Days of Summer! With half the year come and gone it’s more important now than ever to drive as much traffic through the doors and generate as many leads as possible this summer! Check out the inserts for some killer campaign options for July and for more information on how the Sharp Shooter Program can help you achieve your marketing goals in 2017, call me on my direct line 877-242-4472 ext: 112. Happy selling.